Updated for Fall 2022 semester: Please see our Coronavirus Response Site for the latest Boley Law Library information related to the COVID-19 pandemic. This includes any changes to building hours, borrowing, and ways you can receive support. 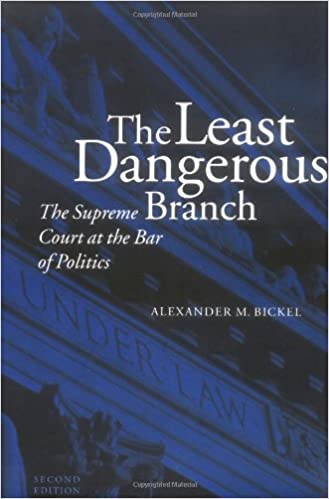 Students seeking to widen their understanding of American law might begin by reading one or more of the classic books on the Supreme Court.

A perfect place to begin is with Archibald Cox’s The Role of the Supreme Court in American Government (1976), which provides a short, extraordinarily well-written introduction to the court’s role in American life.

The best single volume overview of Court history is Bernard Schwartz’s A History of the Supreme Court (1993). Another outstanding work is Edward Lazarus’s Closed Chambers: The Rise, Fall and Future of the Modern Supreme Court (2d ed. 2005), a controversial inside look at the contemporary Court’s political struggles.

Leon Friedman and Fred L. Israel’s The Justices of the United States Supreme Court (rev. ed. 2005) provides short, highly readable biographical sketches of every Justice up to the mid 1990s, with a discussion of their most significant opinions. Lincoln Caplan’s The Tenth Justice: The Solicitor General and the Rule of Law (1987) provides an excellent history of the office of the Solicitor General, which represents the United States in all cases before the Court. Now a bit dated but still excellent reading, Bob Woodward and Scott Armstrong’s The Brethren (1979) is an inside look at the Court during the 1970s, when the Court decided such important cases as Roe v. Wade.

Students who want to investigate the role of the Court and the theory of judicial review in greater detail should consider reading two of the classic accounts of the Court’s purpose and function. Alexander M. Bickel’s The Least Dangerous Branch: The Supreme Court at the Bar of Politics (2d ed. 1986) provides an excellent defense of judicial restraint. John Hart Ely’s Democracy and Distrust: A Theory of Judicial Review (1980) argues in favor of judicial intervention as a necessary counter-majoritarian supplement to democratic government.

Students may also want to explore The Federalist, a series of short essays written by Madison, Hamilton and Jay in support of ratification of the Constitution. The Federalist has long been considered America’s greatest contribution to political theory. For those who find reading all 85 Federalist essays too daunting, we suggest starting with essays 10 (Madison on faction), 51 (probably Madison, but possibly Hamilton, on checks and balances in the Constitution), 70 (Hamilton on the need for an energetic executive) and 78 (Hamilton on the judiciary — “the least dangerous branch” — and the power of judicial review).

Two audio resources deserve mention. Peter Irons and Stephanie Guitton’s May it Please the Court: 23 Live Recordings of Landmark Cases as Argued Before the Supreme Court (cassette, 1993), also available as a print book, and Jerry Goldman’s The Supreme Court’s Greatest Hits (computer disk, 2002) provide audio recordings of oral argument in some of the most important cases in legal history, providing students with a great insight into both the Court and the nature of appellate advocacy.

Finally, students interested in the Court may want to explore the multi-volume History of the Supreme Court of the United States (also known as the “Holmes Devise History”), an immense scholarly project funded by Justice Oliver Wendell Holmes’s bequest to the United States government. Though many of the volumes can only be viewed as failures, several are extremely valuable, including Julius Goebel’s Antecedents and Beginnings to 1801, which provides an in-depth (though sometimes dry) analysis of the early history of American law and the concept of judicial review in England and the United States; G. Edward White’s excellent The Marshall Court and Cultural Change, 1815-1835; and Owen Fiss’s Troubled Beginnings of the Modern State, 1888-1910.