Please see our Coronavirus Response Site for the latest Boley Law Library information related to the COVID-19 pandemic. This includes any changes to building hours, borrowing, and ways you can receive support.

About the Boley Law Library: History

The Northwestern School of Law of Lewis & Clark College (now Lewis & Clark Law School) dates back to 1884, when the University of Oregon established a Department of Law in Portland offering evening instruction to Oregon residents. In 1915, the University of Oregon established a law school in Eugene and the Portland facility became an independent operation known as the Northwestern College of Law. 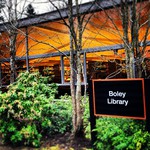 A half century later, in 1965, the College of Law merged with Lewis & Clark College, and changed its name to the Northwestern School of Law of Lewis & Clark College. Following the merger, the Law Library and its 10,000 volumes moved from Portland’s Giesy Building to temporary quarters in Lewis & Clark College’s Aubrey R. Watzek Library. In 1967, the Law Library moved to its present location and was named in honor of the late Paul L. Boley, Esq., a Harvard-trained Portland attorney and long-time trustee of the College known for his special interest in the field of legal education, his scholarship in law, and his leadership in the Oregon Bar.

From its 69,000 volumes in 1973 when Northwestern School of Law of Lewis & Clark College gained full accreditation from the American Bar Association and American Association of Law Schools, the Law Library has grown to over 500,000 volumes, the largest law library in Oregon.

During the 2001-2002 academic year, construction of additional library space and a remodel of the existing Boley Law Library was completed. The most noticeable result of the construction has been the increase in seating and the variety of study venues for students. 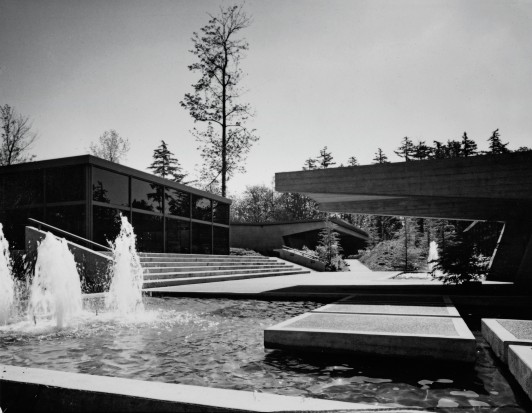 The Boley Law Library building was designed by noted architect, Paul Thiry, known as the father of architectural modernism in the Pacific Northwest.  The structure, completed in 1970, holds the library stacks and has a uniquely designed roof supported with 10 hyperbolic parabolas. The photo on the right from 1973 shows the fountains in front of the Boley Library prior to the construction of Wood Hall.